Posted on 27 Jan 2016 by UP Institute of Islamic Studies 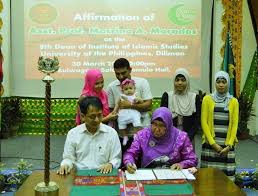 UPD Chancellor Michael L. Tan announced the approval of the UP Board of Regents of the appointment of Asst. Professor Macrina “Hannah” Adjerol-Morados as the new Dean of the UP Institute of Islamic Studies during its 1313th meeting last December 11, 2015.  She is the 8th Dean serving the IIS after Dean Julkipli M. Wadi.  Dean Morados serves a 3-year term which started on January 1, 2016 and will end on December 31, 2018.

Prof. Morados finished her Bachelor of Arts in Islamic Studies and Bachelor of Laws at the Mindanao State University in 1991 and 2001, respectively. She earned her Master’s Degree in Islamic Studies at the UP-IIS in 2003 and presently pursuing her Ph D. in Philippine Studies at the UP Tri-College majoring in Philippine Culture and Society. She passed the Shariáh Bar Examinations and granted license to practice by the Supreme Court on November 7, 2006.  Her field of expertise include:  Muslim Personal and Family Relations (PD 1083), Muslim Women and Children’s Rights in Islam, Interfaith Relations, Islamic Civilization and History of the Muslims in the Philippines.

She is co-author with Dr. Carmen A. Abubakar of the book titled: “CRC and Islamic Law Divergences and Convergences: The Philippine Case” (2007).  In 2008, she was recipient of a Cultural Exchange Program granted by the US Department of State and Purdue University. Her recent published articles include topics on Theocentricism and Pluralism. She was Shari’ah Bar Examiner in 2008 and recently in 2013 for the subjects in Islamic Inheritance Law and Persons and Family Relations, respectively. For this year (2016), she is hoping to finish her second book titled: “Islamic Adab (Ethics) in the Context of Filipino Values,” a UP-IIS book project funded by Zayed University, Dubai, UAE.

Recently, she was tapped by the Philippine Commission on Women (PCW) as Lecturer on the Islamic perspective during the National Gender and Development (GAD) Orientation Seminar conducted by the Commission on Higher Education (CHED) and the Philippine National Police (PNP) held in various divisions particularly in the cities of Cagayan de Oro City, Davao, Cebu and Quezon City, Metro Manila She is also a member of the Transitional Justice and Reconciliation Commission (TJRC) under the Historical Injustice Study Group (2015). Also team leader of an ongoing research engagement (for Caloocan City Cluster) on the study: “Children and Harmful Work in the Philippines: A Child Rights Situational Analysis” in collaboration with Prof. Rufa Guiam of Mindanao State University, General Santos City and Save the Children International.